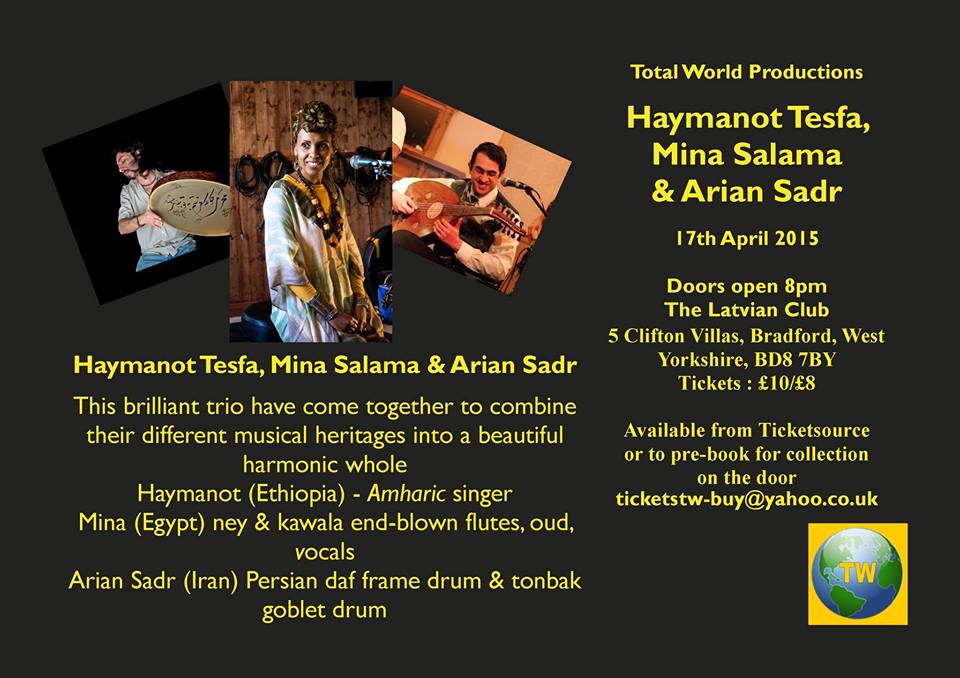 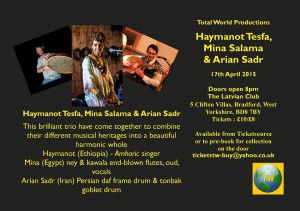 Author & critic Catriona Troth comments:
‘Haymanot Tesfa’s range is extraordinary – at times deep and powerful, underpinning the rest of the music, and at times dancing across the top of it..her voice wraps itself around table after table, drawing them into her spell…people close their eyes, the better to listen and pick out the different strands of the music’
Haymanot herself says:
‘I remember it was in Manchester, after I played a gig a man said to me..’now I want to go home and sleep while having your voice with me. I don’t want any other distraction’.. I imagine he is carrying my voice somewhere in his brain and looking after it on his journey.
All my songs are in the Amharic language. Most of the time I sing in pentatonic scale. Songs like Tizeta and Ambassel are old and public songs which were played by many people. When I sing these songs I always sing them differently depending on what I get from the musicians I play with and the whole atmosphere. I like to be free! So the way I sing is always new even if I’m playing on the same scale and using the same words. Sometimes I play something new which I don’t even remember when I leave the stage. I want to give my audiences the new me always. What makes me happy is that I know that I gave them something they can take with them. People tell me that my singing is therapeutic for them and they thank me for singing, but the truth is that I am also happy while I’m singing’
Haymanot performs regularly with two London-based ensembles, Mook & Newanderthal, has appeared at WOMAD 2014 Festival, Celebrating Sanctuary 2014 Southbank, Journeys Festival Leicester 2014, Platforma Festival Manchester 2013, and for the House of Commons at the Partners for Change Ethiopia event last year. She is currently working with Mina Salama & Arian Sadr on her debut solo CD album.

Immersed in Coptic liturgical, Arabic and European classical & filmscore music, and with a blossoming international career as a multi-instrumentalist with the Alexandria Opera House Orchestra, Mina improbably found himself seeking asylum here in 2012. To our delight he is now surfacing as a talented and in-demand musician with his virtuosity, drive and sensitivity leading to commissions & collaborations across our polyglot UK world music scene, including performing, composing and recording with MIRO Manchester International Roots Orchestra, Rafiki Jazz, with Haymanot Tesfa & Arian Sadr, and with Turkish live-artist Aysegul Balkose.
Mina has performed at the Edinburgh Festival 2014, Celebrating Sanctuary Southbank 2013 & 2014, AHRC Connected Communities Festival Cardiff 2014, Journeys Festival 2014 Leicester, Manchester Bridgewater Hall 2013, Platforma Festival 2013, and is currently working on Haymanot Tesfa’s solo recording project with Arian Sadr.

Arian Sadr
A young Iranian virtuoso percussionist bravely bringing the weight, complexity & pulse of Persian religious & ceremonial heritage music into contemporary cross-genre settings, Arian is emerging as a skilful and popular innovator working with the two principal hand-drums of the ancient Middle East – the large circular goatskin frame drum known as daf historically played by groups of women and dating back to pre-Islamic times, and the emblematic tonbak goblet drum so characteristic of Persian popular & classical music but again with a history linking its use to ritual ceremony. Arian’s playing with both instruments is a powerful & vivid entry, through complex and intensely textured rhythm, into a sonic world of trance & ecstacy.
Arian performs with MIRO Manchester International Roots Orchestra, and with Musicians Without Borders, as well as delivering inspiring daf & tonbak workshops across the North of England. His most recent performance was at the Asia 2014 Triennial Manchester, and we look forward to hearing the outcome of his current collaboration with Mina Salama on Haymanot Tesfa’s upcoming debut album project.